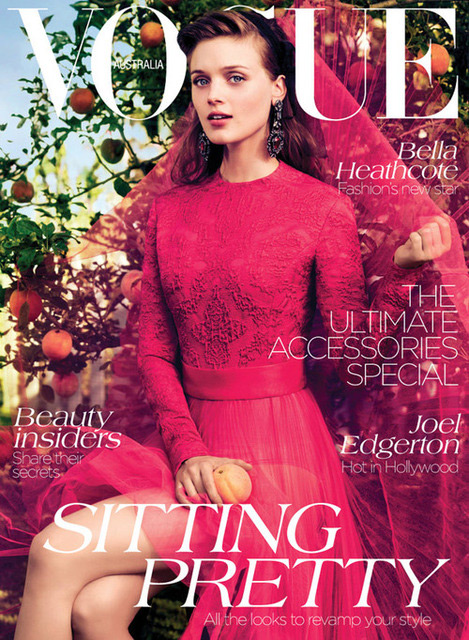 The September issue of Vogue Australia marks Edwina McCann’s first issue at the helm of the magazine, and it looks like she’s keeping up the tradition of featuring Australians on the cover. Will Davidson photographed Australian actress Bella Heathcote “sitting pretty” in red Christian Dior. There will also be a subscriber’s cover for which the actress was clad Chanel. If you saw Dark Shadows, you’ll recognize Heathcote as Johnny Depp’s love interest.

MulletProof wrote, “This may look like Bazaar or even a shot found somewhere at Russh and it's mostly because these magazines still shake it up a little, just the way I wish more Vogues did… even though I loved [former editor] Kirstie [Clements's] work for the magazine, this opens a new chapter that will hopefully make Vogue Australia even more exciting.”

Helmut.newton could barely contain her enthusiasm. “Incredible!” she exclaimed. “The new editor and the new team are a breath of fresh air! The cover is truly incredible! The color palette is beautiful and very alluring. This is easily the best Vogue Australia cover this year!”

Vogue Australia under Kirstie Clements was already well-loved in the Fashion Spot forums, but it’s nice to see that the regime change over there hasn’t hurt the content (or at least the cover shot). We’ve always loved that the magazine makes an effort to promote and celebrate Australians, and it looks like that tradition will remain intact.