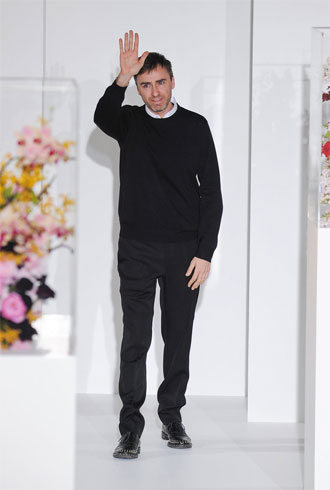 This is not a rumor: Cathy Horyn for The New York Times has just confirmed that Raf Simons is headed to Dior.

The legendary French fashion house has been out of a head designer for thirteen months, ever since former creative director John Galliano was fired on charges of racism and anti-Semitism in France. The open position has been the biggest fashion news story for the past year: barely a week went by without a new rumor as to who would replace John Galliano at Dior.

Practically every major designer working today was at some point pegged as Galliano's possible successor: Alber Elbaz, Marc Jacobs, and Haider Ackermann were often considered to be the more likely candidates.

Raf Simons' name has long been on the list of Dior maybes: last December, WWD reported that the label was finalizing a contract with the esteemed Belgian designer, but the fashion trade publication had released reports of similar negotiations between Dior and Marc Jacobs in August 2011, and those didn't come to pass. Even the most reputable fashion news source was at a loss when it came to determining who would fill Galliano's shoes.

But when it was announced that Raf Simons would be stepping down from his post as head designer at Jil Sander in late February, it began to seem more likely that he would fill the position at Dior. At the height of this speculation, Bridget Foley for WWD stepped in to report that Simons had been "unceremoniously dumped" from his job at Jil Sander and Anna Dello Russo said it was improbable that he'd be headed to Dior. The rumors died down. Last week, Bernard Arnault, CEO of Dior holding company LVMH, took a moment to remind everyone that even without a head designer, profits at the label had doubled in the past year.

Even though Raf Simons started out in menswear, his work in womenswear for Jil Sander was a high critical success. In the new position, the Belgian designer will expand into couture for the first time in his career. He will also continue to design for his eponymous menswear line.

Whatever happens next, at least we've all moved on to a new chapter in the Dior fashion story. TFS user modela said it best in the long-running forum conversation, Who Will Succeed John Galliano At Dior?, "At least we can finally close this thread. Congratulations Raf!!"