The Obama Campaign Panders to SATC Diehards with a SJP Fundraiser, TV Spot 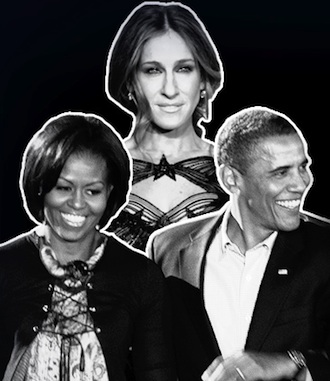 President Obama's much-lauded campaign savvy seems to be a little glitchy this election season. In what seems like a calculated move to energize the young among us, a demographic which was crucial to the President's success in the 2008 election, Obama 2012 tapped Sarah Jessica Parker to star in the campaign's very first national TV spot, which ran last night during the MTV Movie Awards.

The Sex and the City actress got on camera to endorse Obama, and announce a sweepstakes to attend a fundraising dinner for him at her New York City home. When it comes to collecting funds and earning publicity for a campaign, SJP does have a lot going for her: she's one of the most recognizable stars in the US, but she doesn't have the sordid tabloid presence of a Lindsay Lohan or Kim Kardashian; her glammy but still relatable public image makes her the Manolo-fiend BFF you never had.

Still, as far as this election cycle is concerned, the bumbling economy is public enemy number one, and apart from its raunchy plot lines and brunch conversations, SATC is best known for its materialistic excess. And SJP might not literally be Carrie Bradshaw, the character she played on the long-running HBO series, but she's just as much of a fashionplate. The frequent Vogue cover star is even co-hosting the fundraiser with the glossy's editor Anna Wintour (who released her own, more frightening ad, which you can watch below). The glitzy event will surely attract a lot of attention (and raise buckets of cash), but from who?

Look, the under-30 hope-and-change idealists who worked for Obama's 2008 election campaign are by no means immune to the glitter of big-name celebs, but Sarah Jessica Parker and Sex and the City are ancient news. When the series premiered in 1998, today's college kids were way too young to watch it. In fact, in its latest effort to milk the SATC cash-cow with a CW prequel series, the franchise signed on a whole new cast of stars. Sarah Jessica Parker is not the future!

Next time, bring on Rihanna or something, okay?