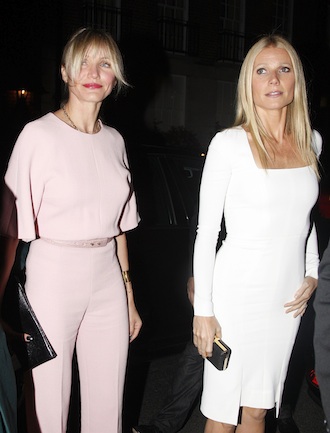 Anna Wintour and Tom Ford followed Jay-Z and Beyonce's much-hyped New York benefit with a $15,000-per-person dinner (of salmon) at Mark's Club (you could also pay £24,000 for the privilege of joining the hosting committee).

Even though throwing the fundraiser meant that Anna had to miss the first day of Milan Fashion Week, fashion's fearless leader is getting used to setting aside some of her professional obligations to help Obama's reelection efforts: Wintour will host a second European fundraiser during Paris Fashion Week. Good for her! It's starting to seem like she has a sense of perspective.

Diaz wore a daring but frankly hideous Emilia Wickstead pale pink jumpsuit and Paltrow played it classy and safe in skin-tight bright-white Tom Ford. For all we know, she just chopped off the bottom of her Oscars dress. And to think Anna Wintour missed Gucci for this. (The Vogue editor wore Tom Ford too, but to far less boring effect.)