Is Apple Bringing Back the Snap Bracelet? 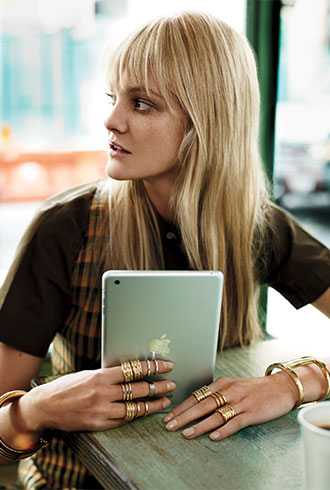 Even though fashion icon Diane Von Furstenberg got gimmicky with Google Goggles at her Spring 2013 runway show (according to recent news, the tech company has since tapped eyewear brand Warby Parker to chic up the futuristic glasses) and designer Vivienne Tam partnered with HP in 2008 on a special-edition notebook meant to appeal to the fashion conscious, if there's a single company which effectively straddles the line between high tech and luxury brand, it's definitely Apple.

Vogue is such an Apple fanboy that this month's issue even has an iPad Mini-themed editorial — you can see a shot from the spread on the right — and it's crazy effective. The iPad Mini retails for less than the iPad 4 (compare $329 to $499 for the most basic versions), making the Apple tablet accessible to a broader swath of consumers. This is, of course, good news for Vogue and its parent company Condé Nast, which hopes to preserve its magazine products in the digital age by migrating to tablet-based sales.

What I'm saying is: it's no secret that editor Anna Wintour lets advertising and editorial cross-pollinate, but Vogue has plenty of incentives to feature the iPad Mini with or without an Apple advertising relationship — the fashion glossy wants people to buy the tablet, download their app, get a digital subscription, all so that the Vogue brand can live in perpetuity. Everything about the above photo works on me: the shot features a girl with bangs sitting at a coffeeshop, wearing a million rings ("Ring parties are the new arm parties," Fashionista's Lauren Sherman declared earlier this month) and reading something (Elle, surely) on an iPad Mini. I saw this, and had an immediate gut reaction: Must get bangs, must buy rings. I haven't acted on either impulse — am currently showing lots of forehead and typing with bare, unmanicured fingers — but a couple days later, I did finally download Vogue's app onto my iPad Mini (I'd been resisting).

If Apple products are already treated like accessories by an authority like Vogue, I can only imagine the fashion spreads we'll get if and when the tech company releases an actual accessory. According to PatentlyApple, yesterday the US Patent & Trademark Office published a patent application from Apple "that reveals an advanced wearable computer in the form of a bracelet that could double as a watch." It's a snap bracelet, which light of my life, fire of my loins — snap bracelets deserve a comeback like nothing else. The so-called iWatch will allow the wearer to adjust a playlist, review call history, respond to a text message with a virtual keyboard and most importantly, feel like the singularity really is near.

Image via the TFS Forums