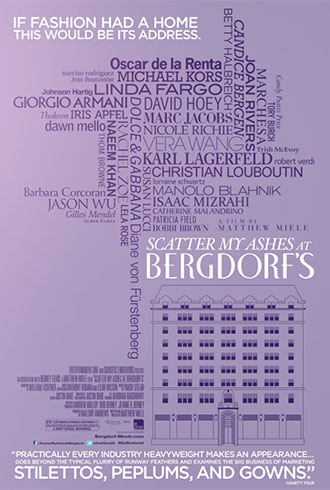 Before you know anything else about Scatter My Ashes at Berdorf’s, the upcoming documentary about the iconic Manhattan department store, you should know exactly how rigorously it was researched: Filmmaker Matthew Miele interviewed 175 people (Karl Lagerfeld, Diane Von Furstenberg, Christian Louboutin and so many others) over the course of one year, essentially creating a video archive — an oral history — of Bergdorf Goodman.

“I was just shocked that a century-old store had no real archive beyond some black-and-white photos on a wall on the 7th floor,” said Miele.

The film traces the store’s development from its founding to the present day, essentially covering the entire 113-year history of the store. Despite the abundance of available footage and the amount of time covered, Scatter manages to be a ridiculously pleasurable viewing experience. The film is cohesive and engrossing, opening up the world of Bergdorf’s, its designers and employees and clientele, and showing how the store reflects the changes that took place in New York City and the U.S. over the course of the the 20th century.

In large part, the film works so well because it’s framed by window designer David Hoey‘s efforts to create the department store’s 2011 display, “Carnival of Animals.” Miele has an abiding interest in the art of window dressing — “I always thought, Wow, they’re so cinematic. They’re so rich. I want to know how those are so creative, and who’s doing it. And for a long time I thought, Wow, what a great job that would be.” — but tracking Hoey as he constructs the annual elaborate display also has a formal function. It’s a narrative device: The window dresser appears commuting to work at Bergdorf’s in one of the first shots of the film, and his story is then woven throughout. Without him, the film wouldn’t have much shape. Or for that matter, anyone to relate to — the designers, buyers, models interviewed for the film are all pretty, shiny and charming, but they’re also intimidating, seemingly otherworldly. Hoey is the opposite of that: he’s a mensch.

Scatter My Ashes At Bergdorf’s opens in theaters on May 3.